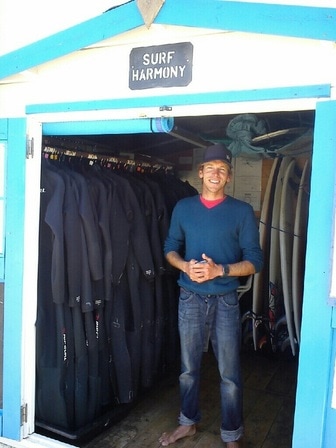 Trained in different relaxation and meditation techniques
Graduated in Tibetan Massage,
Mindfulness meditation retreat
(Dharamsala, India 2011)
Graduated in Thai Massage,
Wat Po Traditional School
(Bangkok, Thailand 2007)
Internships at the Western Meditation School of Fabrice Midal
(2015, 2016)
Seminar "for an ecological entrepreneurial transition"
(at Amanins with Pierre Rabhi, 2016)
Initiation to "integrated approaches of body and mind"
(Christophe André, Nathalie Rapoport Hubschman,
Manuela Tomba, Rebecca Shankland, 2021)
Morgan Ménez has lived among the waves for over 30 years and has been working as a surf instructor for 16 years. His name means in Breton "mountain born of the sea". From Saint Briac, France, Morgan has been passionate about surfing and traveling throughout his lifetime. After spending his childhood between the French Guyana, Senegal and the Reunion Island (where his passion for surfing began), he returned to St. Briac as during his adolescence and began surfing seriously. After earning a four-year university degree in the science and techniques of physical and sport education, certification as a professional surf instructor and travels to Australia and Indonesia, Morgan worked as a surf instructor during  several summers in Lacanau, at Bo and Co Surf School.

Morgan then made his first long trip as an adult without his board when he left Longchamp Beah in a van en route thousands of miles across Europe to Asia as part of a humanitarian mission. After reaching Mongolia by way of Russia by van, he rode a train to China and Laos from where he reached Thailand by the Mekong delta.

During his stay in Thailand, Morgan studied acupressure at Wat Pho Thai Traditional Massage School in Bangkok. He ended his long journey in India where he first worked as a volunteer for a Mother Theresa humanitarian center and then to Bodhgaya and Banaras where he began to practice yoga.

Upon returning to his hometown of Saint Briac, Morgan began to study sophrology and to “westernize” what he had learned during his voyage to India. Morgan became a practicing sophrologist after studying under Pascal Gautier at the Institution of Sophrology in Rennes for two years while also working at the Thalassa Spa in Dinard.

After completing his memoire for his sophrology studies, Morgan left for India once again, this time to Dharamsala, a place of exile and refuge for Tibetans. The purpose of this trip was to better understand the source of sophrology, which has roots in Tibet, which helped to inspire Morgan to write a collection of poems, entitled "Rencontre à Présent" (Meetings in the Present). The phrases Morgan writes on the chalkboard on the wall of the Surf Harmony locale reflects this spirit of poetry, which evolves with each season, day by day, and is influenced by the those who visit guided by the people he encounters as well as the daily events of the world.

Morgan Ménez founded Surf Harmony in 2009, which was the first surf school in Northern Brittany located between Perros Guirec (the department of Côtes d'Armor) and Siouville (the department of Manche). Surf Harmony has been instrumental in the development of surfing on the Emeraude Coast and has shown that it is possible to successfully provide surf instruction at Longchamp Beach.
During the last 20 years, Morgan has also been an active member of the local surfing association, currently called "Bernik Surf Club," investing his time and energy in the club as a committee member, surf contest judge, or as an instructor for junior surfers.

During the winter, Morgan manages Surf Harmony, and continues his studies. Courses on meditation with the Western Meditation School founded by Fabrice Midal. With the Colibris and Amanins Movement, he attended the seminar on eco-entrepreneurship, "For an ecological entrepreneurial transition" with Pierre Rabhi among the speakers, an "initiation to integrated approaches of body and mind" Christophe André, Nathalie Rapoport Hubschman, Manuela Tomba, Rebecca Shankland (2021).
​Finally, he surfs for his own pleasure, sometimes travels, and tries to write. He has always tried to preserve and contribute to the particularly pleasant atmosphere that prevails on Longchamp Beach, both for surfers and for walkers.
Copyright  Surf Harmony
​2009 - 2023